The Sentimental Terrorist: A Novel of Afghanistan


The criticism is often leveled at me by older, more conservative, religious members of my community who feel the books have somehow blemished the reputation of Afghanistan in Western eyes. I don't see it that way. Most of my Western readers -- particularly Americans I've met for a better of a decade now -- never have that impression. My understanding is that the books have depicted a far different picture of Afghanistan that my accusers seems to fear it has.

Most readers have come away with a sense of empathy for Afghanistan and its people; there's been awareness of the richness of its culture, its heritage and its history. And as a result of connecting with the characters of my novels, they have achieved a more nuanced understanding of Afghanistan, and they certainly feel a sense of personal stake when they hear about an Afghan village being bombed. I've received emails and letters to this effect. So, many of these fears are unfounded. And I think by and large, I hope my novels have raised the profile of Afghanistan in a constructive and hopefully instructive way.

You say Kite Runner is an example of pop culture being constructive and instructive. You've also mentioned that American shows depicting Muslims and the Middle East, such as Homeland , need to be done in a "responsible way" and not push an agenda. What is your opinion of America's depiction of Central Asia and Muslims; if it's negative, how do you counteract it using storytelling?

I think it's transforming. In our traditional mainstream media news, I think there's far too many stories dealing with "the radicalized Muslim. Just like in Afghanistan, the story of still looms large even more than a decade after it happened. 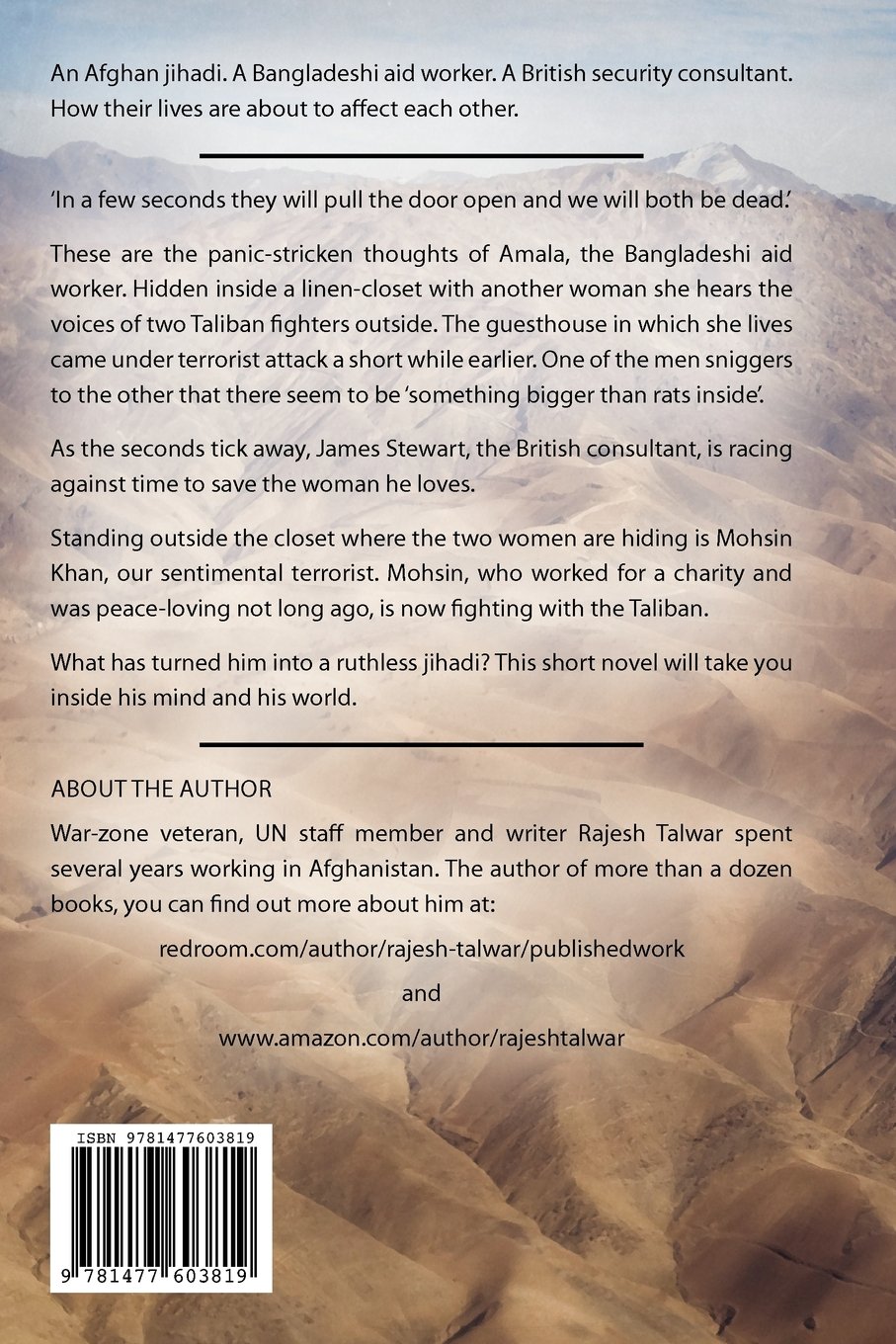 That said, I do hope we can move away from that. I see an opportunity for America to engage with the Muslim world. Perhaps we haven't done it to the fullest extent. For example, in Afghanistan, we're looking at a very young population -- over 60 percent of Afghans are under the age of And most of them are not radicalized or have any hopes or desires of becoming radicalized. There are people with energy, vigor, entrepreneurial dreams; people who want to engage the modern world through technology and education, and I hope we move towards a form of engagement with the Muslim world that is more constructive than simply depicting large sections of a billion people under umbrellas that are pejorative.


Speaking about new narratives, I want to go back to this novel in which you seem very comfortable merging classical, Afghan folklore storytelling with modern narrative fiction. This particular novel casually references the supernatural, such as divs and jinns. Often, it seems Western fiction condescends and rejects the mystical in favor of realism. Do you think Western fiction could benefit, or learn, from Afghan storytelling? There is room for everything. I think if you reject a certain kind of storytelling you handicap yourself and limit your options.

I think current Western contemporary fiction rejects even more than the mythical, it rejects the "sentimental" story. An instinct that has any aspirations of appealing to the reader on a deep emotional level is occasionally branded as sentimental in a kind of professorial, condescending way. My background has never been in literature. I've gone to medical school.

So, I don't consider myself part of "that" world. So what is said does not affect me all that much. But I do think we are seeing an enrichment of contemporary fiction in this country by the rise of new, young voices from Pakistan, India, Iran and hopefully Afghanistan. This can only add dialogue, make it more interesting and instructive as well.

Aside from your career as a novelist, you've spent considerable time and energy as a goodwill ambassador to Afghanistan. That nation has endured decades of warfare and tragedy, most recently the post U.

the sentimental terrorist a novel of afghanistan Manual

What are the grievances that Afghans have with the U. Is the rift irreparable, or can the wounds be healed? There's an abandonment complex in Afghanistan which had its origin in the wake of the Afghan-Soviet war. I'll relate the generic Afghan voice I've heard over and over again in many Afghan communities, which says that once the Afghan-Soviet war was over and Afghanistan had served its purpose by playing a major role in the downfall of the Soviet Empire and ending the Cold War, the West abandoned Afghanistan and its people.

Afghanistan was then exploited by thugs, the militia men, the Taliban and so forth. That is the main grievance leveled against the U. That has echoes to what we're seeing in Afghanistan now. Afghan people are a sovereign people. It's well-documented that they don't like foreigners on their soil. However, there is an anxiety, a sense of trepidation about what will happen once U. Are we going to see a repeat scenario that we witnessed after the Soviet War? Is the country going to unravel and revert back to ethnic war of the 's?

Step Back: Lessons for U.S. Foreign Policy from the Failed War on Terror

Is there going to be mass displacement of ethnic populations? Are we going to see another Afghan refugee crisis? Are we going to see the return of power of peoples for whom democratic ideals are not a priority? These are the views of the Afghan people, and the grievances they have against the West. They want the West to assure them they won't abandon them so it reverts back to this previous state.

We should remember that a great deal of promises were made to Afghanistan after I happen to be one of those that say that significant things have been accomplished in Afghanistan. There's been improvement in the health care sector, education sector, and personal freedoms and so on. For many Afghans, however, the reality they currently face falls short of the expectations they had after the U. Much of that is also leveled against the current Afghan government and its shortcomings and inability to provide for the Afghan people.

A Novel of Afghanistan

Afghanistan's problems seem so overwhelming and insurmountable. What is the proper way for Americans to "help" Afghanistan and Afghan people? People need to understand who the Afghans are and their wishes and aspirations. There's a myth that suggests that Afghans want the U. I think it's important for Westerners to know that's not the case and it's not a constructive way to view Afghans.

Afghans are not beggars; they are fiercely proud and extremely resourceful. They are a very determined people who want to rebuild their country. What the Afghans do want is economic and civic space to accomplish these things. It's been a challenge to deliver this to them in the past 10 years. The U. There are more aid organizations in Afghanistan than you can count and the rebuilding needs are massive. There is a fatigue when it comes to Afghanistan.

This is a particular concern of my own. The Afghan narrative, I have noticed personally, has changed a lot in the past 10 years. People seem far more receptive to the idea of "let's support Afghanistan and its people, let's invest in the country and let's rebuild," but it's very hard to get traction for that particular story. I understand why because this war has been long and costly in all sorts of ways. As an Afghan I can't help but hope that the gains that have been made in Afghanistan - and they are significant - that those gains are not lose once more when the U.

You have had a unique journey toward becoming a storyteller. A child of immigrants, you first became a physician and then a novelist at In many immigrant communities, children are told to abandon their creative ambitions to pursue the safety of the "holy trinity" of professions: doctor, engineer, and businessman.

As such, many of us have become successful professionals, but we haven't produced many modern artists. What's your advice to the aspiring creatives, especially the children of immigrants, who want to pursue their artistic passions but must deal with immense family and community pressures? This is a brilliant question and touches upon something I've experienced firsthand. I think this is something that will sort itself out. Because the reality for the next generation, for example my children, is very, very different from mine.

When I came to the United States with my family in , there were nine of us. We lived in a small house near East San Jose. We lived on welfare. In that kind of incredibly stringent, stressful environment where day-to-day life was uncertain and you're living on government sponsored aid, the idea of nurturing artistic aspirations is esoteric at best. You develop a sense that the world is unstable and you must make your future solid and stable and you have to make sure you never end up in this position again.

For the parents, they think "Okay, our life is gone, but for the children, we have to make sure they don't live a life like this. I already see it being different for my children. I have a year-old daughter and a year-old boy and I don't think I've once told them that I want them to be a doctor, engineer, or lawyer, and I don't think I do want them to be those things. They live in a completely different world than I do with far more opportunities, far more chances, far more leisure to choose exactly what it is that speaks to them so they can pursue it.

I wanted to be a writer so badly growing up that coming to America as a 15 year old, not speaking a word of English, it seemed outlandish that I would make a living writing stories in a language I didn't speak. I think the next generation we will see musicians and artists and poets and painters and our usual motley crew of physicians and engineers and lawyers.

Rumi, the spiritual poet of Islam, was born in Afghanistan and wrote those beautiful words in Farsi. At the same time, we see that the Taliban's interpretation of Islam has initiated a reign of religious terror for the Afghan people. As a person who has lived in Afghanistan and frequently gone back, what role should religion play in modern Afghanistan, and can it be reclaimed from tyrants? I wish it was quite that simple.